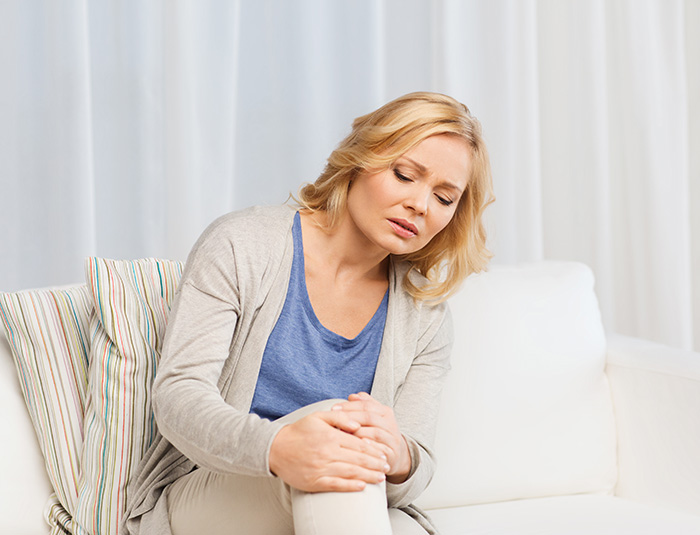 Jo (not her real name) came to see me today regarding ongoing pain in her knees.  “The pain is really bad if I have to sit for a long time, like at the movies and when I get up.  They get a little better when I walk around for a bit.  What can I do? We are going on holidays in 4 weeks!”  Jo is a 42 year old, who is obese ( Ht 165cm, Wt 82kg, BMI 32) and does very little exercise.  “I don’t have time.  Anyway, I run around after the children!”

Osteoarthritis (OA) is a degenerative condition of the joints in which the cartilage may be damaged, bone spurs can grow around the joint (osteophytes) and the lining of the joint can become inflamed (synovitis). OA may be caused trauma or be related to other causes such as genetics, obesity or ageing.  The pain in the joints increases over time and seems to be worse in the mornings and be relieved with movement.  This is a common presentation for OA.  Often it is only a problem when there is an important event coming up!

To help Jo, we would confirm that it is OA, via taking a history, completing an examination of the knees and, if indicated, bloods tests to exclude other conditions.  Sometimes an x-ray may be conducted and rarely an MRI of the knees.  Once it is confirmed that it is OA, then there are several things that can be done.  The most important aspect to controlling OA is activity.  The more the better.  This activity should also be combined with weight loss and a gym program for further strengthening.  Indeed, many of the pain medications, such as anti-inflammatories and paracetamol or steroid injections into the joints are aimed at reducing the pain to a level that enables increased activity.  The replacement of joints is something else that can be considered.

Jo underwent steroid injections in her knees and in conjunction with her medical practitioner developed a graduated exercise program that enabled her to enjoy her trip overseas and on returning continued the program including a supervised weight loss program.

ChronicHealthConditions.com.au is a specialised website from Dr Clem Bonney dedicated to providing you with information pertaining to common chronic health conditions in Queensland, Australia.

The material on this website, including but not limited to text and images are for informational purposes only. The objective of this website is to provide broad consumer understanding and knowledge of various topics. It is by no way intended to be a replacement for professional medical advice, diagnosis or treatment. Always seek the advice of your general practitioner or other qualified health specialist with any questions you may have regarding a health condition or treatment and before undertaking a new health care regimen, and never disregard professional medical advice or delay in seeking it because of something you have read on this website. Copyright © 2019 ChronicHealthConditions.com.au